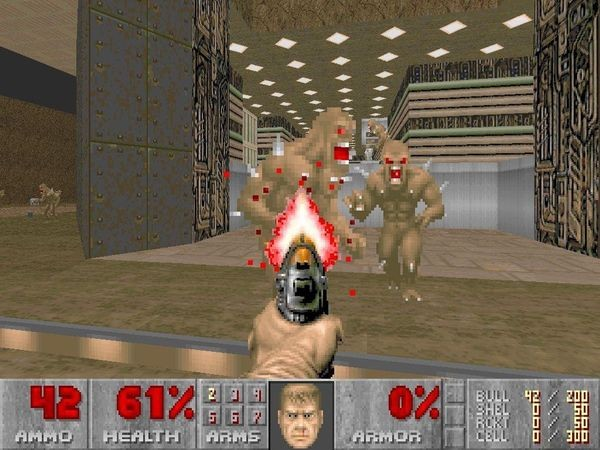 Thrusting the player into the middle of the action from a first person perspective, the First Person Shooter (FPS) has arguably been the most successful video game genre over the last few decades. Classic first person shooters were revolutionary for their time and still hold up even today. In this blog I will explore my love for some of these classic pre-y2k first person shooters, discussing the impact they had on the gaming industry.

The original Doom was released in 1993 by id Software and revolutionized the genre by introducing fast-paced action, large levels, lighting effects and unique weapons. Doom was my introduction to the FPS genre and it blew my mind. Coming from having played only side-scrollers and overhead view RPGs in the late 80s and early 90s, its sometimes dimly lit 3D environment with hellish creatures and growling demons terrified me as a kid. Doom II, released in 1994 continued in this tradition with an even greater variety of weapons and enemies.

Doom I & II pioneered multiplayer gaming through the introduction of the deathmatch, the free-for-all mode of play that was won by accumulating the most kills. This was before Internet access was ubiquitous, so multiplayer gaming was possible over local networks or via direct player-to-player connections over dial-up modems. For young people that will sound like ancient technology, but the multiplayer experience was still quite enthralling, despite the primitive computer networking over landlines. Parents and other family members back then interrupted many deathmatches by just picking up the phone.

Released in 1996, Duke Nukem 3D by 3D Realms revolutionized the shooter genre by combining action-packed shooting with exploration and puzzle-solving elements. The game featured environments that allowed players to interact with objects such as light switches in order to progress through levels. It also featured mature themes and humorous dialogue which was unique for its time.

Moving away from the horror elements in the Doom series, Duke Nukem took the FPS genre in a more irreverent direction in a world full of aliens and mutated, porcine cops. Incidentally, the sequel, Duke Nukem Forever, seemed to take forever to be released. It was eventually released in 2011 after 15 years and used to be a running joke at the time with gamers doubting it would ever be released; similar to the modern situation of the long hiatus between the original release of Grand Theft Auto V and its still eagerly anticipated sequel.

Quake I, another classic by id Software, was released in 1996 and revolutionized the gaming industry with its advanced 3D engine technology and immersive sound design. Unlike id’s previous FPS games, Quake was their first to use true real-time 3D rendering fully. Previous games used two-dimensional sprites in 3D environments.

Released in 1997, Quake II featured many improvements over its predecessor such as advanced enemy AI, larger levels, and much better graphics such as realistic, translucent water. The game also featured an expansive single-player campaign that pushed players to explore large levels while fighting off enemies along the way. I remember splashing around in the water while marveling at the “realistic” graphics–at least by 90s standards of realism in video games.

For me, Quake II was the first FPS game that I regularly played online against strangers. Though this is taken for granted now, back then it was quite innovative to be able to play against random people any time you wanted.

At a time when cutting edge 3D games were thought mostly to be exclusive to personal computers, gamers were suprised by the release in 1997 of Goldeneye 007 on the Nintendo 64 console. It revolutionized console shooters and FPS games in general by introducing an expansive single-player campaign with large levels, and split-screen multiplayer mode for up to four people. Network play was not available since consoles in the 90s had not yet implemented network connectivity.

GoldenEye 007 was based on the James Bond film by the same name. It is probably my favorite FPS game from the 90s because of innovative gameplay mechanics that required stealth in addition to firepower.

Released in 1999 on PC, Quake III Arena revolutionized the FPS genre by focusing almost exclusively on multiplayer modes. Today, multiplayer modes are the most anticipated in any FPS games but then it was still uncommon for this mode to be the main focus.

I didn’t play Quake III as much as the other Quake titles but I had to include it here because it was an extremely popular game in the early 2000s as esports really started to take off in popularity.